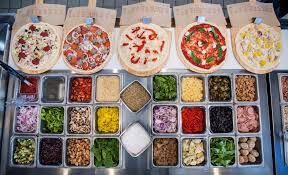 My granddaughter just turned four years old. With this abundance of years on the planet she has developed a picky palate. In fact, the only thing she will eat is exotic unicorn or dragon meat with a tossing of Tinkerbelle’s dust on a bed of  Willy Wonka’s vegetables.  Even though she has been eating with me in restaurants since she was 2 weeks old and knows how to order, and complement the chef, she has now decided that she needs to control everything - including what she eats.  I tried something new to satisfy her discerning penchant upon hearing about a new pizza joint where you can literally make your own pizza.  With late hours, healthy options and cheap prices, Blaze Pizza desires to become the perfect meal for any kid. This pizza place offers all you can eat toppings, gluten-free options and vegan cheese. 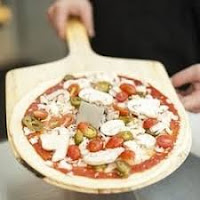 We entered, ordered a “Do It Yourself” pizza and the small ruler was engaged and excited to control the destiny of her pizza.  The staff played along and the garlic pesto sauce became fairy dust, the mozzarella shredded cheese became unicorn hair, the pepperoni became spots, the pineapple became hoofs.  She ordered the same pizza she usually likes, but because it was made just for her, not to share or with anyone else preferences on it, it became a treat to be devoured.  She ate every bite of her 8-inch creation.

We all ordered individual pizzas with the boys heaping meatballs, sausage and pepperoni. I tried the white sauce, roasted garlic, sautéed onions, chicken, and mushrooms with a dusting of sea salt on the top. I was impressed with the quality and quantity or items you could choose to sprinkle on your pie. It was one of the best pizza’s I have tried.  Amazed and intrigued I asked for where this genius concept came from.

The Manager told me that Blaze offers exceptional quality cooked at lightning fast speed. Designed by Executive Chef Bradford Kent (aka The Pizza Whisperer), his goal was to put fresh, made-from-scratch dough along side healthful, artisanal ingredients on an assembly line. You get to pick as much or as little as you want. From towering of meat and cheeses to fresh vegetables, you have no limit to what you put on your pizza.  Then they place it in a super hot oven, cook for 180 seconds and what comes out is a fast-fire’d, perfectly crisp perfection pizza.

It is a chain (which I usually avoid) but this “do it yourself” pizzeria spoke to my need also to finally get the pizza I want, not the one the tossers in the back decide.  Blaze is a new and growing franchise with over 100 locations now. Locally one of its owners, Mitch Wolf, has been a marketing instructor at Cal Poly for 10 years.

The concept behind Blaze Fast-Fire’d Pizza is simple: You pick your crust, sauce, cheese, and toppings, and your pie is popped into a blazing-hot oven for a mere 180 seconds. It then emerges, ready for your enjoyment. It’s fresh. It’s fast. It’s exactly what you want it to be.

CEO and founder Rick Wetzel explained that the idea was actually conceived out of a need that I found too.  “My wife and I were looking for lunch one day. We wanted pizza but were disappointed to find that there was nothing available that was both fast and fresh. So we ended up at Chipotle instead. Elise looked at me and asked if the Chipotle service model would work for pizza. That was our ‘aha’ moment.” Simply put, where fast food focuses on the value of the food, Blaze focuses on the value of the experience. Wetzel’s inspiration comes at a time when there is a greater demand for fast food made from fresh, high-quality ingredients.

If you are not creative or wanting a unicorn pizza, they offer Signature Pizzas with plenty of choices to satisfy the artisan within you. I had to try the Art Lover with artichokes, mozzarella, ricotta, chopped garlic, and red sauce dollops. It was fantastic and I enjoyed a draft beer with my pizza while Gary inhaled the S’more cookie before his Meat Eater with pepperoni, crumbled meatballs, red onion, mozzarella, and red sauce.

I have been there 4 times last week, as my granddaughter is obsessed with the pizza and it was her birthday week.  Everything I have had is fresh and the staff is friendly, helpful and fun.  It is the perfect food for families or starving students whose mom told them to eat healthy.  This is the best fast food alternative I have ever experienced. 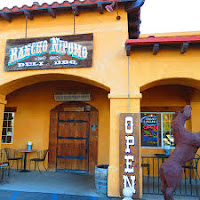 They say the most important aspect of a restaurant is location, location, location. Sometimes, a location that needs a GPS to find, offers the best chow.  I was perplexed and curious to find an out-of-the way prize that many told me had the best ribs this side of Memphis. Rancho Nipomo BBQ & Deli is located where Nipomo butts up to Santa Maria at highway 166, hard to find, but worth every twist and turn. (Go 101 south and get off at the 166 exit, turn right and it is 50 feet from the exit on the right). With “hoots and hollers” of triumph we entered the arable farm decorated deli and were warmly greeted by Richard, our host and food facilitator. He was amicable explaining in great detail each dish we queried, from the cooking process to the sauce preparation, just as they do in a five-star restaurant.

I ordered a slab of ribs that came with coleslaw, rice, beans and toasted garlic teleta bread. Gary started with a slice of Cherry Cheesecake with tres leche moist cake. Richard found this to be perplexing so he brought me a Fish Taco as my appetizer. The white Alaskan cod fillet was panko breaded and pan-fried to perfection. It was smattered in fresh cabbage, lemon, crème fresco, and house made guacamole and pico de gallo. Both pleasantly surprised and with mouths salivating, we anticipating the delights that were forthcoming.

The pork Ribs were huge, overhanging the plate and cooked to perfection, falling off the bone in a dry sauce that could match any in the South. I don’t think I breathed as I inhaled half a pig. I have to talk about the barbeque sauce. It is not your typical ketchup and brown sugar kind. It was sweet, hot, and dry. It has the consistency of thinned out molasses. Its aroma was a brown-sugary-smoky almost cumin-esque. When I tasted it, my taste buds went to heaven. The proprietor was not giving out any secrets, but I will continue to eat it until I wear him down or figure it out. There is a hint of brown sugar, some kind of roasted chili pepper, citrus, and honey. It is very original and will be haunting my dreams!

The coleslaw is made fresh every hour. They magically took tart cabbage, and made it sweet and desirable. Next, day we went back and ordered two Vaquero tacos. The Asada taco with tender charbroiled beef was oozing out of the two fresh corn tortillas. The Carnitas featured superior meat seasoned to delight. You helped yourself to the salsa bar to make this taco your own.

Richard saw that we were gluttons and possibly a gold mine for customers, so he brought us samples of the bean, rice, Beef Chile Colorado, and Chile Verde. The rice was moist, but not mushy and exploding with flavor, as was the beans. The Chili Colorado was soaking in a mole type sauce, but still tasted beautifully dry, it was absolute perfection. 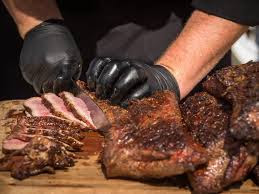 Rancho Nipomo offers a unique selection of Hispanic cuisine and carefully smoked Southern style meats filled with unique flavors that celebrate our diverse culture. I have never seen such a flawless amalgamation of two different styles emerging for a culinary delight. As I wrote this review, I got hungry and talked Gary into driving back to Rancho Nipomo to try just one more dish.

Rancho Nipomo has burgers, salads, tri-tip, enchiladas, burritos, tortes and more. It is a family run operation with Mama cooking, Papa setting the tenor and waiting on the clients.